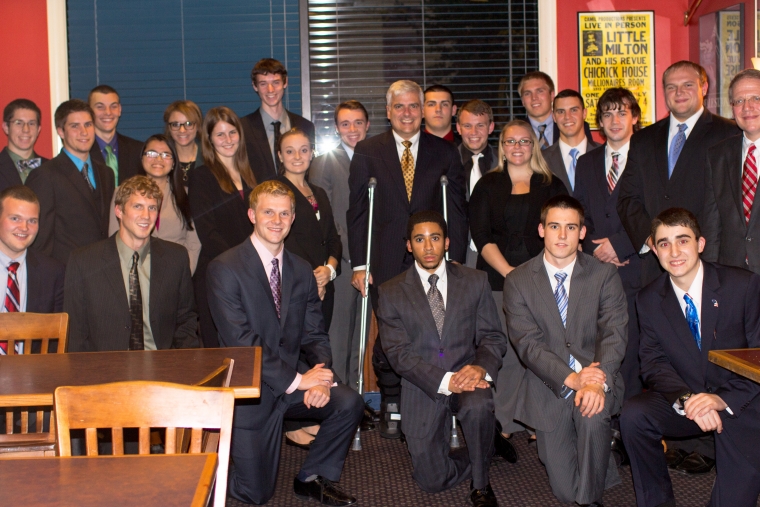 Just after voting on the Senate floor on two cloture votes, Senator Casey stressed his ongoing quest to overcome partisanship and encouraged the students to pursue lives of public service. Justice Scalia told the students that America is free because of the U.S. Constitution’s structural protections of checks and balances and the Separation of Powers even more so than the Bill of Rights. He urged the students to continually re-read the Federalist Papers, which should be “dog-eared on your desk.” At the new headquarters of National Public Radio, Mara Liasson described her career path in radio journalism and emphasized nurturing the skill writing succinctly and clearly, which she mastered by providing five minute news summaries on NPR for over a decade. She also assessed America’s current state of political polarization and the need for leaders to bring America together.

The students also participated in a Civil Procedure class at Georgetown University Law Center taught by constitutional scholar Charles F. Abernathy, who later provided insights to the students about pursuing legal careers. Former Congressman, White House lawyer, and Mayer Brown Partner David McIntosh, a co-Founder of the Federalist Society, urged the students to take up the mantle of leadership to preserve the U.S. Constitution’s values, which he views as the best hope for freedom in the world. Scott Bullock, the lead constitutional litigator in the 2005 U.S. Supreme Court case, Kelo v. New London, described his public interest legal practice of strategically enhancing property rights protections. Wesley Goodman, leader of the Conservative Action Project, encouraged the Stover Scholars to “talk about the American dream again” as they pursue public leadership. The students also visited the U.S. Senate Gallery and toured both the Library of Congress and U.S. Supreme Court.

“Meeting with several political and judicial leaders on this trip and hearing their insights on the future of this country, through various ups and downs, gave me hope for what is yet to come,” said Patrick Kopas, Senior pre-law major from Fairchance, Pennsylvania. “The D.C. trip was a great experience because we were able to meet those in the Nation’s Capital who you hear and read about. Meeting Senator Casey, Justice Scalia, NPR’s Mara Liasson, constitutional lawyer Scott Bullock, and many more political leaders put faces to names. It was fascinating to pick their brains,” said Andrew Stanko, Freshman sports broadcasting major from Lewisburg, Pennsylvania.

“Justice Scalia was both down to earth and extraordinarily wise simultaneously, exactly the way a Supreme Court Justice should be,” said Matthew Kenney, Sophomore Computer Science major from Northumberland, Pennsylvania. Nika Anschuetz, a Sophomore Electronic Media major from Zelionople, PA said, “Scott Bullock renewed my faith legal activism on behalf of property rights which is what the Institute for Justice is doing.” “Justice Scalia’s assessment of the current state of the polis could not have been more accurate. His acute understanding of the role of the Constitution in society, what is going on, and what is to be done was most thought provoking and formative,” said Daniel Czajkowski, Senior Criminal Justice and Political Science major from Frederick, Maryland. Chase Ayers, Senior Pre-Law major from Charleroi, Pennsylvania commented, “This trip has inspired me to pursue the causes I hold most dear despite opposition.”

Waynesburg University’s Stover Center for Constitutional Studies and Moral Leadership explores national and international issues in the context of constitutional law and Christian ethics with the objective of creatively transforming the polis.