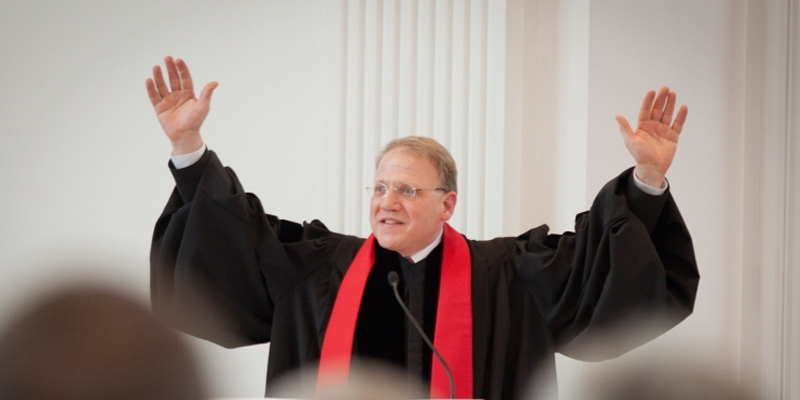 The ordination and installation service will feature a sermon preached by The Rev. Dr. M. Craig Barnes, Senior Pastor of the Shadyside Presbyterian Church in Pittsburgh, Pa., entitled, “The Great Temptations of Scholarship.” The Rev. Dr. Donald P. Wilson, Interim Executive Presbyter, Washington Presbytery of the Presbyterian Church and Waynesburg University Trustee, will also give the “Charge to the Minister and University.”

During the service, the Waynesburg University Lamplighters choir, under the direction of Melanie Catana, director of choral music at Waynesburg University, will perform “Sicut Cervus,” by Giovanni P. Palestrina and “My Soul’s Been Anchored in the Lord,” by Moses Hogan.

Stratton received his Ph.D. in Christian Social Ethics and M.Div. from Princeton Theological Seminary, his J.D. from Georgetown University Law Center, and his B.S. in Economics from the University of Pennsylvania’s Wharton School. He is a former clerk to U.S. District Judge Claude M. Hilton of the U.S. District Court for the Eastern District of Virginia, and is a member of the bar in Virginia and the District of Columbia.

The Stover Center for Constitutional Studies and Moral Leadership, founded by Waynesburg University alumnus Dr. W. Robert Stover, is an interdisciplinary scholarly center dedicated to bringing insights from the U.S. Constitution’s Founding Era and Christianity to bear in the contemporary public square. Each year up to five incoming students are chosen to receive Waynesburg University’s prestigious Stover Scholarship.